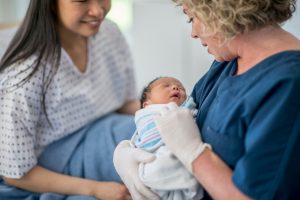 When boys are born, they have a covering on the end of their penis, called the glans or foreskin. Circumcision is an elective (optional) procedure to remove this foreskin. It can be performed by an obstetrician-gynecologist (ob-gyn), is ideally done within the first two days after the baby is born and is brief, usually taking just a few minutes.

Deciding whether or not to circumcise an infant is very important and parents should ask questions or discuss concerns with their doctor while a woman is still pregnant—not after the baby is born. It’s important to discuss both the potential benefits of circumcision as well as the possible problems that could develop as a result of the procedure, even though it is considered low risk.

Pros and Cons of Circumcision

In contrast, some parents choose not to circumcise their infant boy. Some of the medical reasons include possible bleeding or infection, the possibility of cutting the foreskin incorrectly or concerns about improper healing or urinary issues developing.

Another concern many parents have is about the pain a baby experiences during the procedure. In past decades, pain medication was not typically used during circumcision. However, today it is used more often and recommended by many experts, including the American Academy of Pediatrics (AAP).

Local anesthesia can be used by a doctor or an ob-gyn to reduce the baby’s discomfort, usually administered by an injection or as a cream. Parents choosing to circumcise their baby should make sure to discuss pain relief with their doctor prior to the procedure, and if they would like to be with their baby during the procedure, they should also discuss that with the doctor.

About the Circumcision Procedure

To perform circumcision, a doctor will follow the steps below:

Finally, keep this in mind: when a boy is older, it may be possible to circumcise him, but the older he gets the greater the risk. A 2014 study in the Journal of the American Medical Association reported the follow results:

The lesson? If parents decide to circumcise their son, the best decision is always to do it as early as possible.

To learn more about what the American Academy of Pediatrics has to say about infant circumcision, click here.